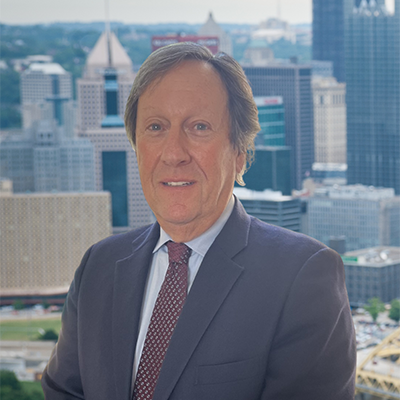 Jerry Feldman joined the Signature Financial Planning team in 2022 as an advisor after merging his existing practice. With decades in the financial services industry, Jerry has been an asset to his client families and will be serving Signature’s clients with the same level of dedication and care.

Jerry earned a BS degree in accounting from the University of Buffalo and a MBA in federal taxation from Pace University in New York. Following his discharge from military duty (United States Army Medical Corps), he began his finance career at an accounting firm in New York City.

After moving to Pittsburgh, he established an investment advisory firm that managed several hundred commercial real estate properties throughout the country and later transitioned to working with families as a Registered Investment Advisor.

An active member of the Pittsburgh community, Jerry has served on the Board of Directors of the Western Pennsylvania Montessori School, as President and on the Board of Directors of Wildwood Golf Club, and on the Citizens Advisory Committee for the North Allegheny School Board. He also served as Vice Chairman of Northern Regional Police Department’s Crime Prevention Committee and is a lifetime member of the Disabled American Veterans.

Jerry is also passionate about the environment. He was appointed by Pennsylvania Governor Edward Rendell to serve on both the Ohio Basin and Statewide Water Resources Committees and served as Chairman of the Water Conservation Committee (Save Water PA). He is the recipient of the Governor’s Award for Environmental Excellence presented by the Pennsylvania Department of Environmental Protection.

Jerry and his wife, Anita, have been married for more than 50 years and have two sons and six grandchildren.

A chat with JERRY

What made you want a career as a financial advisor?

I was always interested in accounting as well as being involved in financial investments since I was a teenager. Family members were in this profession, and I had a natural draw toward it. My career path of being involved in real estate investments and then eventually branching off to financial planning was just a natural progression.
The gratification and enjoyment I get from seeing my clients’ financial success assures me that I made the right decision.

What do you like best about being part of the Signature Financial Planning family?

I have known two of the partners for an excess of 30 years and gave gotten to know the other members of the firm since I joined. In such a short period of time, I already feel extremely comfortable with the entire firm. We share the same high principles and approach to helping clients meet their financial goals. I could not have imagined merging with any other firm and achieving common goals on this level.

How do you want your clients to view their wealth?

As a means of achieving a comfortable and enjoyable lifestyle, as well as ensuring the ability to help their family achieve their educational and lifestyle goals.

What are your biggest accomplishments?

Outside of my work, I am incredibly proud of how present I have been in my sons’ lives and seeing them achieve financial independence in their respective professions. I feel that I’ve been successful in achieving financial independence for my immediate family as well. Of course, having raised two sons alongside my wife—who is truly the glue holding our family together—is a source of both enjoyment and immense satisfaction.

What are your passions outside of work?

Spending time with my sons and being involved in their lives and activities. I love watching my grandchildren (aged 9 to 17) play and excel in their favorite sports. I also love to watch professional sports (I’m a huge New York Yankees and Pittsburgh Penguins fan!) and play golf.

What is your most memorable travel experience?

When my sons were still young, we took a family trip to Alaska to attend a college basketball tournament (The great Alaska shootout) in late November. It was a thoroughly enjoyable and a unique trip.

AS PERSONAL AS YOUR SIGNATURE